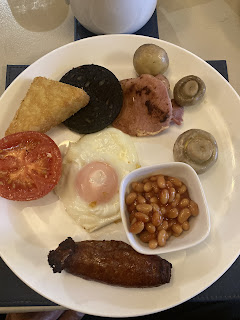 Traditional English Breakfast The full English breakfast, a veritable national institution, consists of fried eggs, sausages, back bacon, tomatoes, mushrooms, fried bread and often a slice of white or black pudding (oats and pig blood).  It is accompanied by tea or coffee and hot, buttered toast. These days, it may also include other items such as baked beans and hash browns. The tradition of breakfast dates back to the Middle Ages, when there were usually only two meals a day; breakfast and dinner. Breakfast was served mid or late morning, and usually consisted of just ale and bread, with perhaps some cheese, cold meat or dripping.  By Georgian and Victorian times, breakfast had become an important part of a shooting party, weekend house party or hunt and was served a little earlier. The gentry loved to entertain lavishly and that included breakfast. Breakfasts were unhurried, leisurely affairs with plenty of silver and glassware on show to impress the host’s guests. The breakfast t
Post a Comment
Read more 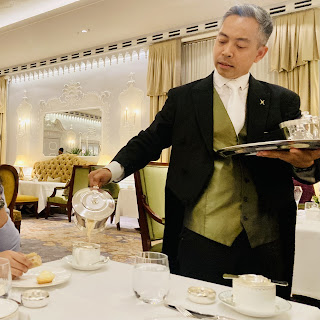 The quaint English tradition of afternoon tea   The custom of drinking tea was popularized in England during the 1660s by King Charles II and his wife the Portuguese Infanta Catherine de Braganza, but it was not until the mid 19th century that the concept of ‘ afternoon tea ’ first appeared. According to legend, Anna Maria Russell, Duchess of Bedford, a lifelong friend of Queen Victoria, would get hungry around 4 PM. It was a long time to wait for dinner after an early lunch. So, she would ask for some tea and sandwiches (invented earlier by the English politician John Montagu, a.k.a. the 4th Earl of Sandwich ). Soon, that became her small ritual, and she started to ask her friends to join her at  her little tea parties  - starting the tradition of afternoon tea. Traditional afternoon tea consists of a selection of dainty sandwiches (our selection included Severn & Wye smoked salmon with brown shrimp and rock samphire on rye bread; Cucumber, dill and horseradish on white bread; Roa
Post a Comment
Read more 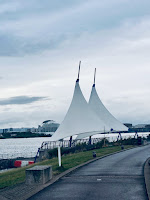 British Antarctic Memorial Exhibition The Memorial Exhibition at barrage sails in Cardiff Bay, Wales commemorates a historical event that captured the world’s imagination a century ago. In 1910, the British Antarctic Expedition, led by Captain Robert Falcon Scott, departed on June 15, 1910, from Cardiff Bay in the vessel SS Terra Nova in a desperate race with Norwegian Roald Amundsen and his team to be the first humans to reach the South Pole.   The British expedition, unfortunately, ended tragically & the crew never returned. Worse still they lost the race and were greeted with the sight of Norwegian flags that were posted by Amundsen and his team, who had successfully reached their destination three weeks earlier. On January 17th, 1912, as they set back from the South Pole having lost the race, Captain Scott wrote in his journal, “Great God this is an awful place.”  Clearly, the sting of defeat left a bitter taste. "I am going outside, I may be some time”. These were
Post a Comment
Location: Cardiff Bay, United Kingdom
Read more 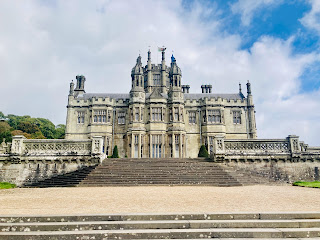 Margam gardens and castle Margam castle After the Norman Invasion of Wales in the 11th century, Robert Consul (d. 1147), 1st Earl of Gloucester the illegitimate son of King Henry I of England, and Lord of Glamorgan, granted the lands at Margam to Clairvaux Abbey, a French order of white-robed Catholic monks founded by St. Bernard, for the establishment of a new Cistercian monastery which became Margam Abbey. Earl Robert’s bequest comprised ‘all the land between the Kenfig and Afan rivers, from the brow of the mountains to the sea’.  Abbey ruins Once the largest and richest monastery in Wales, the Abbey remained an important center of significance until its dissolution at the hands of Henry VIII in the 1530s. Part of the medieval Abbey survives as St Mary's parish church, and beside the church is the Margam Stone Museum, with pre-Norman and medieval carved stones from the area. Orangery By 1727 the estate had established a reputation for citrus fruit with over 50 lime, lemon, and or
Post a Comment
Location: Port Talbot SA13 2TJ, UK
Read more 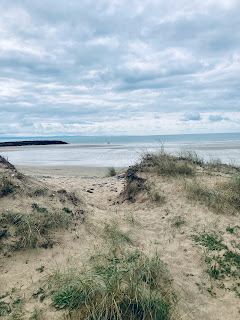 Kenfig Nature Reserve Founded by Robert Earl of Glouchester, Kenfig in South Wales was once a thriving town of between 700 and 1000 residents that was unfortunately regularly attacked by Vikings between 1167 AD and 1321 AD. Wild storms and huge tides around circa 1433 AD, caused by a natural alignment of the sun and moon that occurs once every 1700 years, were mainly responsible for creating the expansive dune system that once stretched along the coastline of southern Wales from the Ogmore River to the Gower peninsular. In 1440 AD the Abbot of Margam reported unusual flooding from the sea, a full four miles inland! Over the next 700 years, Kenfig is all that remains of this unique ecosystem, making it Wales's best sand-dune reserve and Europe's largest active sand-dune system. The only trace left today of the ancient borough is the castle keep which rises out of the sand to the North. It is one of the UK’s most important wildlife conservation sites. The 1,300 acres area is mana
1 comment
Location: Nature Reserve, Kenfig, Bridgend CF33 4PT, UK
Read more 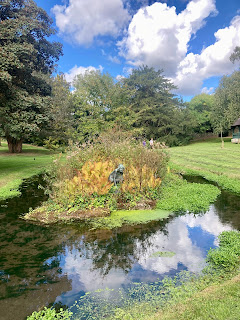 St Fagans, Cardiff St Fagans National Museum of History, commonly referred to as St Fagans , after the village in which it is located, is an award-winning open-air museum in Cardiff, Wales and the most popular heritage attraction in Wales. It chronicles the historical lifestyle, culture, and architecture of the Welsh people. The Museum stands on the grounds of St Fagans Castle and gardens, a late 16th-century manor house donated along with 100 acres of beautiful parks and grounds, to the people of Wales by the Earl of Plymouth in 1948. Scattered around the castle grounds are over 50 historic buildings including farmhouses, a row of ironworkers’ cottages, a medieval church, a Victorian school, a chapel and a splendid Workmen’s Institute, brought here from their original sites across Wales and reassembled.  Abernodwydd farmhouse Farmhouse window Abernodwydd Farmhouse: This picturesque timber-framed farmhouse dates to 1678 and comes from Llangadfan, Powys (Montgomeryshire). It is typical
1 comment
Location: St Fagans, Cardiff CF5 6XB, UK
Read more 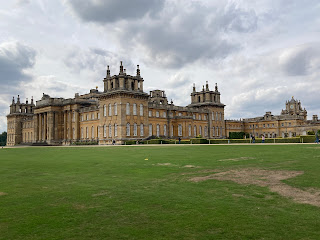 Blenheim Palace Blenheim Palace, near Oxford, is the only non-royal, non-episcopal country house in England to hold the title of palace. It is the home to the current 12th Duke and Duchess of Marlborough and was also the birthplace of Sir Winston Churchill. Blenheim Palace was presented by Queen Anne on behalf of a grateful English nation to John Churchill, the first Duke of Marlborough, in recognition of his victory in 1704 over French King Louis XIV at Blenheim in Bavaria. The Blenheim Tapestry shows the moment the French commander surrendered to that first Duke of Marlborough — absolutely dashing on his white horse with the carnage of war in the background.  The palace was designed by John Vanbrugh and Nicholas Hawksmoor in the nascent albeit eclectic and short-lived English Baroque Architectural style and was built between 1705 and 1722.  The magnificent structure sits majestically amidst a 2,100-acre undulating landscape sculpted from 1761 onwards to the designs of Lancelot "
Post a Comment
Location: Blenheim Palace, Woodstock OX20 1PP, UK
Read more 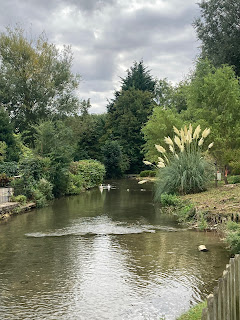 Bourton-on-the-Water   We heard great things about Bourton-on-the-Water, a charming village located in the Cotswolds Area of Outstanding Natural Beauty. And it didn't disappoint. The name Cotswold has been popularly attributed to mean "sheep enclosure in rolling hillsides". The Cotswold is England's third largest protected landscape and is defined by the bedrock of Jurassic limestone that creates a type of grassland habitat rare in the UK and is quarried for the oolitic limestone rich in fossilized sea urchins, which turns into a characteristic golden or honey-colored when weathered. The name Bourton comes from the Saxon word " burgh"  which means a fort or camp and " ton"  which means a village or settlement.    As the name suggests, flowing gently through the heart of Bourton-on-the-Water is the crystal clear waters of the Windrush river. Sometime in the early 16th Century, the river was channeled through the center of the village in order to p
Post a Comment
Location: Bourton-on-the-Water, Cheltenham GL54, UK
Read more 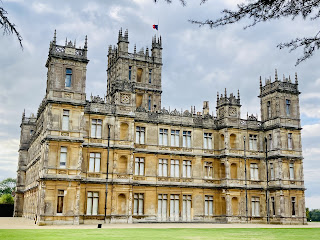 Our visit to Downtown Abbey aka Highclere Castle Highclere Castle Seven generations of the 1st Earl of Carnarvon have lived at Highclere since 1793 when King Charles I rewarded Henry Herbert with the earldom in recognition of his support in quelling a civil rebellion.  Lancelot ‘Capabilities’ Brown The pastoral grounds highlighting the undulating natural scenery were designed by the famed landscaper Lancelot Brown , nicknamed "Capabilities Brown" because of his fondness for saying that a place had “capabilities.” Old structure clad with a facade to give it new look from 3 sides The original structure modestly named Highclere Place House was built in 1679 by the politician and future attorney general Sir Robert Sawyer , an ancestor of the Earl of Carnarvon, and stands on the foundation of a palace owned by Bishop William of Wykeham built in 749 AD.  Winged Wyverns (a legendary winged serpent-like creature with two legs) stand guard at the entrances.  " Ung je Serviray
Post a Comment
Location: Highclere Park, Highclere, Newbury RG20 9RN, UK
Read more
More posts